Do you know what isn’t any fun?  Finding the perfect spot for your sound cart, getting all antennas deployed, running (and making safe) a cable to video village so that you can get your monitors up, and then having video village move every shot or two which causes you to constantly have to re run the cables.  Don’t you just wish that there was a low cost, high performance wireless video solution so that you can keep your video cable in that perfect coil that probably took you hours to perfect?

Well, rejoice!  Newcomer Accsoon has got you covered!

Transmitting on the 5ghz WiFi band, the CineEye can feed high grade video to 3 Android or iOS devices simultaneously.  If that sounds familiar, it’s probably because you’ve heard of the Teradek Serv Pro.  While the Serv Pro can operate on the 5ghz and 2.4ghz bands, as well as transmit to 10 devices simultaneously and use an SDI input, it is only compatible with iOS devices.  More than half of the smart phone world uses android devices, so that’s bad move in my book.  So, in that department, the CineEye has a massive leg up.  Not to mention the fact that the CineEye is equipped with an internal 4 hour battery.

The Serv Pro is also a lot more expensive at around $1800 USD.  The CineEye on the other hand retails for a shocking $219 USD.  Yes, the Serv Pro has more bells and whistles, no question.  But, in the sound department we have to ask ourselves: “what do we need to accomplish on set?”  Do we need 10 connections?  Do we need both the 2.4ghz and 5ghz bands?  Chances are that we don’t, but to each their own.  And again, let’s not forget about the lack of Android support on the Serv Pro.  That alone puts it out of the running for me.

Accsoon advertises a 100 meter transmission range with no obstructions.  If you look at the range test in the video above, you can see an example of the excellent performance from the CineEye.  Some might point out that such tests are loaded because we rarely are in perfect line of sight.  That’s true, but how far are we from camera or video village in almost all cases?  Not even close to that far.  Most often, we are stationed in the next room and the CineEye will punch through even 3 walls no sweat (assuming that they aren’t lead lined).  On the multiple projects during which I have used the CineEye, it has performed extremely well without dropouts or lag. 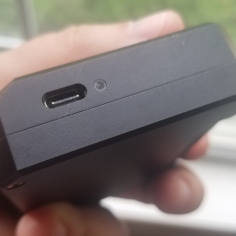 The physical design of the CineEye is nice and sleek.  There is a single HDMI port, a power button, a USB-C port for charging, and a threaded mounting hole.   It’s kind of all that you need on a smaller unit like this.  There are also 4 LED indicator lights on the front panel to show the remaining battery. 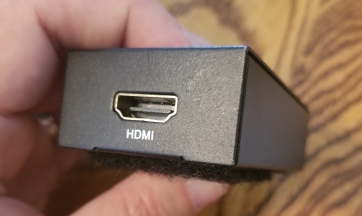 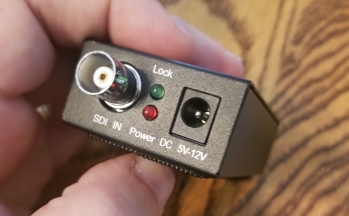 To some, the lack of SDI port on the CineEye might seem like an issue.  At most, its a minor inconvenience because of the myriad of SDI to HDMI converter options online in the $20 or $30 price range, like the one pictured above.  They typically will operate on 5v power like the CineEye so you could use the same USB power bank to feed both units and give yourself a super easy setup to throw on the back of the video village monitor.   This is the box that I like to use, but there are plenty out there.  Pair those together and you have an incredibly low cost wireless video option, that utilizes the monitor thats already in your pocket. 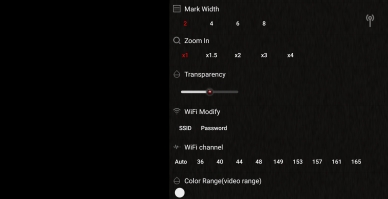 The free App is simple and straightforward.  You connect to the WiFi signal from the CineEye and then you hit the “on” button in the menu and there’s your video.  As you can see from the screen shots above, you have access to a lot of great video tools that the sound engineers probably won’t need, but are nice to have.  You also have the recording button in case you want to save a reference clip on your phone for later.  In the menus, you can also change the WiFi frequency to a specific channel instead of Auto, which is good to have if you need to avoid other 5ghz transmissions in the area.

If Accsoon creates another model of the CineEye down the line….. Say…. a “Pro” model….. *hint* *hint* *wink* *wink*, here are a few things that I feel would be nice to have.

Some of these might be lofty requests, but I want to note that I don’t feel that this device is deficient at all.  This is a wish list for a higher model specifically, because at the CineEye‘s price point, it’s already doing a lot.  The current model has an excellent place in the market where it is.  The higher model would be for more advanced situations which need those extra bells and whistles, whereas for the majority of setups, the current CineEye will work great.

In summary, the CineEye is poised to bring high performance wireless video solutions to operators who, for monetary reasons, would previously not have had access to anything but a corded connection.  It has a welcomed spot in my kit, giving me a video feed at the cart, and my Boom Operator a convenient frame guide for the microphone.  You literally cannot go wrong with the CineEye and I recommend it to anyone needing to see the frame on set.  Great job Accsoon, I look forward to seeing what you come up with next!