Yesterday Sennheiser “soft-announced” the long awaited arrival of the Sennheiser G4. The Sennheiser G3 has been on the market for nearly a decade. In that time 100,000’s of units were sold. And before Sennheiser releases the G4 this April here are some odd facts about the G3 units you probably didn’t know.

You will notice that the URL links to some the source material have been removed. The government website I was able to source the FCC test also included trade secrets for upcoming products not just from Sennheiser but others as well. I felt it was best to report the facts from the FCC test and keep the source anonymous out of respect to the manufactures in our industry.

Nope. According to the FCC listing the Band A models are almost 36mw. And the Band B (RIP Band B) was nearly 40mw! Only the Band G units are 30mw.

This would explain why the distance increases of a modded G3 reflected a lot closer to the performance of other brands 50mw transmitters (other brands also offer better preamps and limiters built into their transmitters but thats not what we are talking about right now.) Remember milliwatt is a terrible way to measure RF output. The actual dBm RF output of 35mw is 15.4dBm and 50mw is only 16.99. It all comes down to the antenna.

They are worse! A lot worse!

While above I might have said that milliwatt is a terrible way of measuring RF output I should have also included that milliwatt measurements are logarithmic. So a 100mw is actually 20dBm and 10mw is 10dBm. But no matter how you slice it 18mw is low, sorry Band G users. For G3 Band A users the plug-on transmitter is 22.5mw… Again all I can say is RIP Band B, we loved you and your 35mw dearly…..

Yup. No where in the manual of any of the G3 series does it say this. But it wasn’t till I was able to get some 1 on 1 time with their engineers did I find this out. And surpisely they thought everyone already knew this… No sir. You never told us.

So if you are going to keep your G3 units (and I suspect the G4 will also include this feature) set your squelch settings to LOW before running your Easy Setup Scan. This will give you the best chance for finding the cleanest frequencies. Than you can set your squelch settings to what ever you normally use. Personally I just keep them at low and keep them within their usable range.

In June of 2016 Sennheiser announced a new band for the G3, the A1 band. This band goes from 470-516mhz. Very little marketing was put into this announcement and for a long time after the announcement no dealers even carried the A1 band.  Infact while researching this article it took me a great deal of work to find the FCC test. Even Sennheiser’s own website doesn’t include 470mhz as an option.

5) There Have Been Secret Upgrades and Versions

Yup. This confusion sometimes can make people think they have purchased a fake Sennheiser production but because I take these units apart A LOT I have seen a lot of different parts used all inside what we know only as a G3. But there have been multiple revisions and updates to the PCBs and the body itself. Here are a few.

The Addition of a Heatsink: 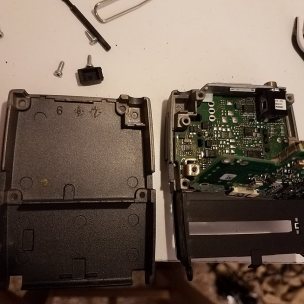 There has also been some minor revisions that I personally have noticed around the antenna port on the RF PCB. These probably have to do with FCC rule changes over the 10 year career of the G3. Along with what Band A even is… does it start at 516mhz or 518mhz… ?

Today we can start the count down to the retirement of the Sennehesier G3’s service to sound. For many of use the Semnheiser G3 was our first professional wireless system. It was a stepping stone before we purchased Lectrosonics or Zaxcom equipment. For some of us our G3s made the transition from talent microphones to become our IFBs and camera hops. Others were given new life with SMA ports and paired with their bigger brother the SK2000. But one thing is for sure the G3 was there for us when we needed it most in our careers.