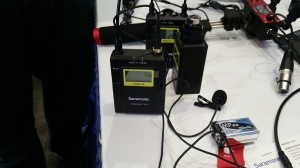 This past week I had the joy of attending NAB 2016 and checking out the new Saramonic wireless series. This is Saramonic’s first professional grade wireless microphone system. Before this they were still making VHF systems that were barely a step above the Audio Technica Pro 88W. Most of the items Saramonic sold in past were merely re-branded audio products coming out of China.

This seems to be an original product, despite looking like a Sony UWP clone. I talked to their product specialist at NAB and said they were working off old Sony metal molds in their factory.  And while the older Sony UWP units do look similar, the Saramonic receiver packs a real punch by delivering more features at more than half the price. During my time at their booth on the tradeshow floor someone was next to me doing their own blog video and were using a Sony UWP kit. Once side by side, you can tell the Saramonic’s plug-on XLR transmitter is less pretty and more basic in design.

The RX  is a dual channel RX. It features a stereo output that puts each TX on its own channel. A simple 3.5mm splitter cable will let you ISO record/mix these two signals. Originally these units where shipping with a dual mono output that was blending the 2 signals, often causing phasing issues. But within a month of launch the company listened to early reviews and quickly fixed the issue and made the RX a true dual RX a day before NAB 2016. Now I will say I did hear some very minor bleeding between the two channels coming out of the RX in my Sony 7506 headphones, but I also had the volume cranked at MAX!

The ergonomics are on par with the G3 or the UWP systems. The LCD will get buried in your audio bag if you don’t clip it to the side. The LCD is bright and can be turned permanently on or have a sleep timer.  I really wish that Saramonic would have taken notice from Rode, Lectrosonic or Zaxcom and put the LCD on top of the reciever. This would allow for it to be a better bag unit; but at least it’s not as terrible as the Sennheiser AVX RX. Some simple remodeling and you’d have pro style RX that could retail for double what they are asking for now.

The build quality is rock solid. Both the TX and the RX are solid metal, and actually are a little heavy. The TX might weigh 1.5x what a G3 weighs. And the RX is the same, thought the weigh of the RX doesn’t matter because really its two receivers in one so its still lighter than two G3 receivers. 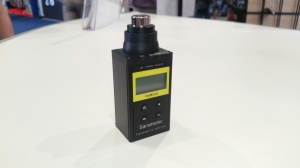 If you were to drop either unit you may scratch it, but you wouldn’t have a broken unit on your hand. The XLR Plug On transmitter is light weigh so adding it to a boom won’t be too bad. It will offer +48 Phantom and will be released in early May.

The real big punch coming from these units comes in the form of having power levels on the wide-band RF output. The different levels are 30mw/20mw/10mw. This allows for a better battery life for when your working on small sets and talent never wonders far. The systems RF signal operates across nearly the whole 600mhz spectrum making it very easy to find a clean frequency, plus a scan/IR sync is also featured on the units. This also will allow you to operate quite a few units in a close proximity to each other.

Will these units have a big impact on our day to day kits? NO. They are being marketed toward DSLR indie filmmakers. Where you will see the biggest impact is on the second hand market. For the price of a used G3 kit, I can now buy 2 TX and 1 RX brand new. This could cause a bottoming out of the used market.

So far this sounds a lot like a fluff piece, and it really kind of is.

These units perform just as you’d except from how they are specked and advertised. The flaws I saw were that battery holder is made of cheap plastic which feels weird in an heavy duty metal housing. The A/B Grouping is also kind of a problem. The group letter and the frequency on the transmitter needs to match group letter and frequency on the receiver in order for a signal to pass through. IR Sync solves this but being able to set the “A Receiver” to a frequency should be all I really should have to do. Adding the grouping really doesn’t seem necessary. The group letter signal is through a weird Pilot signal which also in turns means you can’t use these with spare G3 or Lectro gear you may have in your setup.

I did ask if in the future users would be able to turn the group mode to OFF, they told me it could be done with a firmware and that they would pass the idea along to their engineers. (I wouldn’t hold my breathe)

But that said, if you are new and starting out, the barrier of entry into this industry is now one step lower. Or if you work in a small market or corporate video work these could really help you add to your kit without breaking the bank. For the price of a SD633 you could buy a Zoom F8 and 4 sets of these, maxing out all 8 inputs. (Though I don’t suggest doing that, that would be a waste of money.) And in smaller markets, that would be enough to handle 95% of the local work. So often we get trapped in our LA feature film mindset that we forget that a lot of video production in the rest of the country is the 2 person interview or a walk and talk host on camera. This 30mw system would be able to handle all of that. It was also pointed out to me by a fellow sound mixer that these won’t make a line producer mad if you were working by/over water and had to file a L&D.

As always, please your comments below. 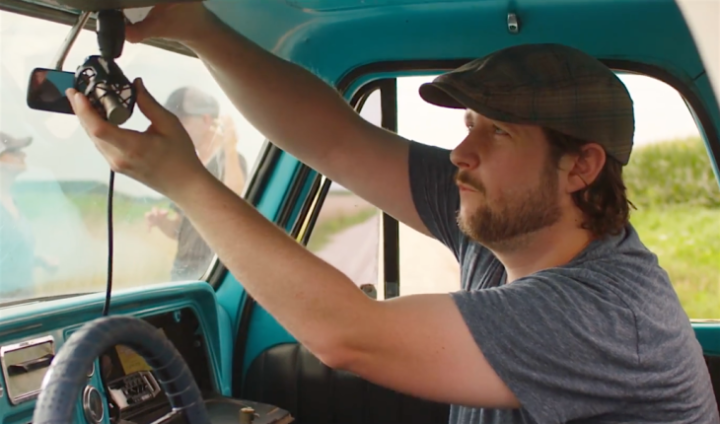