UPDATE Jan 2018: This post has been updated to reflect new equipment that has come out since it’s original publishing.

The Zoom F8 has been called everything from the greatest gift to Indie sound mixers to the “DSLR shit of audio.” The latter comment was how the Zoom F8 seems to usher in a race to the bottom for sound recordist. But does it? When José Frías did his A/B test against the 788T, the pre-amps held their own. And when B&H Photo did their A/B test against the SD688, the F8 still sounded pretty dang good. #boycottBHphoto So at first glance it does appear that for $999 you too can compete against senior sound mixers with 30 years of experience and expensive rigs.

But when you open the box you realize $999 really bought you a lot of opportunity and is really just the beginning of your spending spree.

The 120v Wall AC adapter might as while be a paper weight. You will never use it. (Along with that, throw out the 1/4″ camera plate adapter too… that thing is stupid!) So that leaves you with AA batteries or the 4pin Hirose connector.

It’s just not financially advisable to run the unit solely off AA batteries. Also the battery bay door will be buried in your bag under the recorder, making it a nightmare each and every time you do it. They do sell extra AA battery sleds, but they cost $25 a piece.

A better option is to go with an external battery.  They are bigger investments upfront, but are off set by how much you would have spent in AA over the life of the external AND your kit fee goes toward recouping the rest of this cost. Except to pay $500 for a NP1 battery system. This type of setup will allow a Zoom F8 to run for 21+ hrs straight with all 8 channels recording. It seems like a lot, but that battery system pays for itself in 40 days of use. A goal easily accomplished in the first year of ownership. There are other cheaper external battery setups, but if you ever plan to run wireless receivers off your external battery in the future, a NP1 battery cup is typically ready to integrate with any BDS.

UPDATE Jan 2018: If you want a cheap DIY alternative I posted a blog about building your own external battery to work with your audio recorder.

Well now you have it and can pass it out to your new clients like it’s candy right? Not quite. Unless you are on a shoot with the Arri Alexa, all cameras have terrible internal time-code clocks. I don’t care what camera you mention, it will drift. You will need some kind of external time-code box to Velcro onto your crews camera.

This last year at NAB, Timecode Systems won the Game Changer Award for really mastering wireless timecode. Their system will wireless sync all lockit boxes on your set to a master signal coming from your audio bag. And when you are asked to send timecode to a GoPro, they are the only game in town. Their systems aren’t the cheapest but they are far from expensive in comparison to everyone else. At $450 they will act as master, slave, or standalone timecode boxes, and the only lockit box that offers genlock. You will want to buy 2 units because the Zoom F8 looses timecode sync to its own internal clock when you power the unit off. You can avoid that by spending that $500 on a NP1 system I mentioned, but you will still need at least 1 lockit type box for your camera.

The cheapest of timecode lockit boxes is from Tentacle Sync for $275 or two for $500. These seem to have a Love Hate relationship with owners. Some rave about how they changed the game, others loathe their lack of standalone functionality. I personally am sold on the Timecode buddy from Timecode Systems. Also you will need a few different cables for these units since TC inputs on cameras comes in all sorts of flavors, none of which are cherry vinilla. And it’s your job to supply the cables, not the camera departments. Except to pay $40-$60 per cable.

UPDATE June 2017: In our coverage NAB 2017 we wrapped it all up posting a complete guide to the new sync boxes that were just announced. You can view that HERE. We also did a individual review of the Ambient NANO HERE and the Tentacle Sync E HERE.

3# Accessories: (some are optional, some are not)

UPDATE Jan 2018: K-Tek has since released a slightly smaller bag that fits the Zoom F4 & F8 better. We posted a review about the new bag HERE. 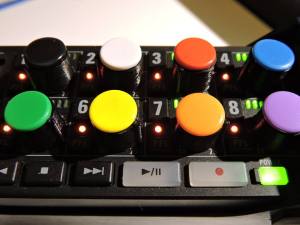 This one is more a users choice. I personally don’t have a hard time with the size of the F8 knobs. Some find their size to be pure torture. One thing is for sure, you can’t operate an F8 with snow gloves. A sound mixer in Spain sat down and designed a snap-on knob that covers the existing knobs without damaging the F8. It is suggested that if you want a SUPER snug fit to use a small strip of stick-it between the orginal knob and the 3D printed knob. At 15€ plus shipping it really is the cheapest thing you will buy for your F8. Private message their  Facebook page HERE to order your snap-on knobs.

UPDATE Jan 2018: Here is a list of what users REALLY are using for media cards. The cards on the Zoom approved list are discontinued. ALWAYS run a full test on every new card you buy. Use cards for projects you’ve actually fully tested.

Is the F8 apart of the race to the bottom? No. The audio recorder may be the most expensive single item in most mixer’s audio bag, but at $999 it really isn’t a huge fall from other recorders. Once you factor in that it still cost the same to make it an operational recorder for professional use, it is not the “DSLR shit of audio.”

The Tascam HS-P82 ships with nearly identical features and sells for just $1000 more. When you also consider the cost of shotguns, boom poles, wireless kits, camera hops, Comteks , cables, cart, lavs, and expendables… The difference between a $10K audio kit and a $13K audio kit is minor when you consider the value difference is in which recorder the mixer bought. That $3k is the difference between choosing a Tascam HS-P82 / Sound Devices 633 or the Zoom F8.

The barrier to entry into the no-budget-indie location sound mixer world is lower because of the F8, but the barrier into the PROFESSIONAL big boy sound world is still very much the same.