I spend a lot of my time at work doing one-man band jobs.  A lot of corporate, commercials, or narrative that requires sit down interviews with a C-Stand.  But at various intervals throughout the year, I do also work on a good amount of narrative projects which require a boom operator.

Because I am not a dedicated cart mixer, I need to keep my gear in a position where I can move between cart and bag setups easily and quickly.  No rack mounted gear.  It just isn’t the type of work that I regularly do.  What this means is that the recorders that I own are smaller, more mobile.  While I just recently picked up a Sound Devices 833, I am used to using a Sound Devices 633, and occasionally a Zoom F8n.  Unlike the 833, the 633 and F8n do not have a slate mic input.

In fact, there are a lot of bag mixer/recorders which either do not have a slate mic, or have no input for an external high quality slate mic.  The ones that do have a built in slate mic, have really shoddy audio quality.  It works, but it could be a lot better if you could plug in your own.  Enter the West End Recording COMM/IFB Box.

This really handy device will allow you to take a feed from one of the outputs on your recording device, add a dynamic microphone into it, and then feed it back out into a transmitter or hard line.

One method that many cart mixers will use to set up their boom operator’s headphones is that they will have a transmitter going to a belt pack receiver.  They will send only the Boom channel prefade, plus route their slate mic so that it only goes to that transmitter.  That works great if your mixer has a dedicated slate mic input, or if you have an unused channel that you can route to that transmitter (but even that is cumbersome because you’d have to adjust the fader up and down any time that you wanted to speak to the boom op).

When using the COMM/IFB Box, you would send only the prefade boom track to the output for the boom op.  Then take that output and feed it into the box, which will insert the high quality microphone into the feed, and then take the output of the box and feed that into the transmitter.  This might sound a little complicated, but it’s actually very simple when you get it in front of you.  Your boom op will thank you for it because the gain on the COMM/IFB Box is incredibly low noise, and your voice will come through extremely clean.  Plus, you have a handy gain knob on the front of the unit, which you can use to adjust for whispers if you have to give notes during a take and make sure not to be heard in the scene.

Another useful aspect of the COMM/IFB Box is that it has two front buttons to activate the mic.  These two buttons each feed one of its two outputs independently.  So in theory you could be using the box to feed 2 separate boom ops or two speakers, or a combination of both.  Then, choose which one who you want to hear your mic.  The version that I tested was the 5-pin XLR model, which came with a breakout cable to two standard 3-pin XLR’s.  But as you can see in the brochure, they also make a model with two individual ta3 outputs.

On the bottom of the unit, there are a variety of switches that will allow you to customize specifically how the microphone is married with the signal.  One of my favorite features is how you can set it to dip the incoming feed by half when you activate the microphone.  This allows your voice to be heard more clearly, but also at the same time not completely cutting off the boom operator’s ability to monitor the boom.

Oh look!  Theres also a nifty battery compartment.  While you can power the COMM/IFB Box via the 2.1mm DC jack, the ability to use a 9v battery could be very helpful.  Why?  Because clearly the setup that I have been discussing is not the only way in which one could use this device.

Say that this was being use to feed lines to on-screen talent.  The COMM/IFB Box could be holstered on the belt of the person speaking into their ear (using the included belt clip shown above), which would then require it to be battery powered.  In fact, the COMM/IFB Box kind of reminds me of another similar device…….

Why the Sound Devices MM-1, of course!  It was one of the first images that entered my mind when I got my hands on the COMM/IFB Box.  Using the MM-1, you could technically accomplish the same types of things as you could with the COMM/IFB Box, it would be cumbersome.  It would be similar to using an unused input on your mixer in that you’d have to bring up and drop the gain when you wanted to speak.  So what the COMM/IFB Box does is create a specific solution for this specific need.  It does it in a very favorable form factor, with a lot of power packed inside. 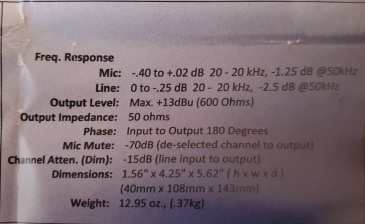 Here is the overview of its specs.  While the specs tell you a lot, I believe that it’s the actual experience in the field which does, and should, have the final word on any tool.  I will say wholeheartedly that the word is excellent on the COMM/IFB Box.  Whether you’re utilizing it like I did, or if its part of an in-house studio installation, this little guy is a great problem solver that can streamline your workflow and increase your ability to get things done.   I strongly encourage anyone with even a cursory need for these features, to check it out for themselves.