Four years ago I was preparing for a feature movie. The DOP asked me what kind of timecode solution I had on hand. As we all had back in the day, I showed him the Ambient Lockit, the size of a small cigar box, with some weight to it as well. He took something from his jeans’ pocket, I thought it was a 9-volt battery. ‘Lets try this, it’s a prototype some friends of mine made’. Well, the rest is history, Tentacle Sync clearly revolutionised the timecode-world, both size as price wise.

Last year they came out with version 2.0, with bluetooth functionality, as reviewed here on this site. Primarily bluetooth is used to sync up different Tentacles wirelessly, and for communication with smartphones. But this month they also came out with a separate (iOS only) app; Timecode Audio Recorder. 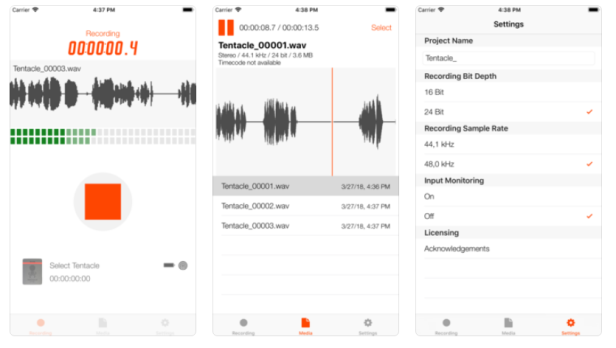 The people at Tentacle Sync are of the modest kind, but I’m willing to go as far to declare another revolution is initiated with this tiny app. Before this, we had basically three options; We go the Zaxcom route (transmitters with build in recorders, TC jammed via Zaxnet), the pocket recorder route (Lectrosonics/Zaxcom with tc, Zoom, Tascam, all provide costly or low budget options for this), or we simply download a (dumb) recorder app for our smartphones and stick a lav mic in it. This new app takes the latter to the next level, it stamps all the files with timecode, continuously syncing up with the Tentacle devices via bluetooth, when in reach.

See Cheesycam’s small video below for a quick working example:

Now obviously this will not replace a wireless TX/RX system, but from time to time we are confronted with situations we have to record something out of reach, or let’s say you ran out of all your wireless systems, it’s a handy tool to have in the bag; Just get a jumper cable from your lav connector to the TTRS of your phone (don’t forget that the newer iPhones don’t have a jack by the way, you need a jumper for that as well) or iPod, and you have a emergency/backup recorder WITH timecode at your disposal.

My two cents on this:

I titled this post ‘Poor man’s’ timecode based lav-recorder. an iPhone or iPod is not cheap off course, as a matter of fact it’s more expensive than the Lectrosonics PDR, but you get the idea. Most of us already have the phone already. If not 20 other people on set do, in case of emergency.
Like I wrote above, it will not replace a TX/RX system, for starters we can not monitor the signal. The Zaxcom and Audio ltd. systems can even remotely change settings like gain. But maybe that’s even possible with some software updates of the app. Bluetooth is not the strongest RF signal, it has its distance limitations, so real world test should prove how long the internal clock can keep up with longer takes and when the devices are out of reach for continuous jamming.
Besides using it with a lav-mic, I can also see it as a backup recorder, directly attached to your primary recorder.

Oh and yes, this all only works with The Sync E, the successor to the original Tentacle Sync.